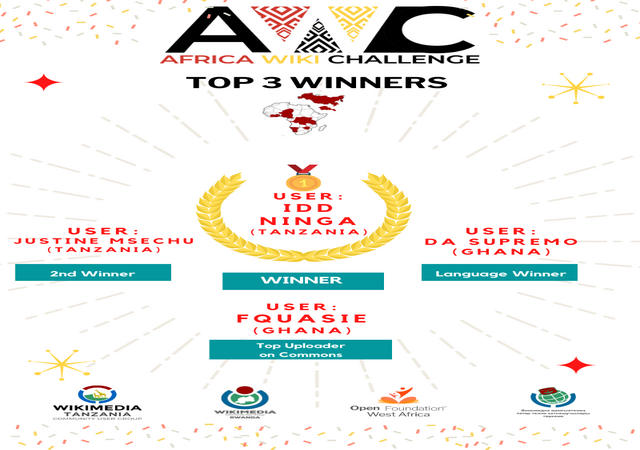 We are excited to share the results of the maiden edition of the Africa Wiki Challenge. Africa Wiki challenge is a campaign that seeks to bridge Africa's content gaps on the web. This year we launched the maiden edition of the challenge with the theme “LandMarks in Africa” which sought to generate content about the diverse kinds of landmarks across Africa on Wikipedia and it’s sister projects. A layer of the campaign was dedicated to disturbing existing articles about landmarks, to provide more information and increase it’s visibility through images.

The contest saw one hundred and eighty-four (184) participants from twelve (12) countries creating over one thousand one hundred and sixty-three (1163) articles and improving about two thousand five hundred (2.5K) articles and over five hundred (500) images of landmarks uploaded on Wikimedia Commons. This reveals the level of impact generated by the campaign and is still cognisant of the fact that there is yet much more that needs to be done to bridge the African content gap on the web.

Here is the list of the top three winners of the contest;

Idd Ninga from the Wikimedia Community Arusha emerged as the winner at the end of the contest With a contribution of just a total number of forty-eight (48) new articles. Idd populated these articles with a lot of credible information and references hence earning him a lot of marks. At the end of the contest, Idd gained one hundred and sixty-eight marks(168).

With a total number of one hundred and seventeen (117) new articles about landmarks in Hausa. Da Supremo gained four hundred and thirty-three (433) points to attain this feat.