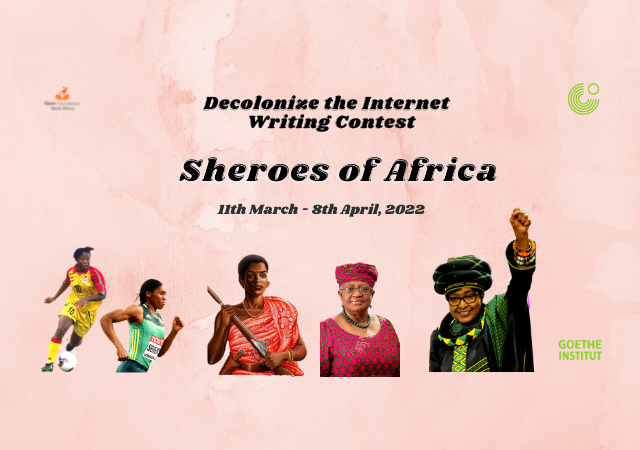 The development of Africa was attained by several significant contributions by great individuals who have the continent at heart. The study of African women's history emerged as a field relatively soon after African history became a widely respected academic subject. However, most laurels and accolades have been attributed to the “heroes” of the land and not the heroines/sheroes of the continent.

Angela Davis once said; “ when black women win victories, it  is a boost for virtually every segment of society.” One can easily count the number of women who are celebrated in accordance with the development of Africa. Who writes these stories of African women?? Why are they not celebrated on the web as much as men are??

From time immemorial to now, women have always been instrumental in the development of Africa. From the likes of Yaa Asantewaa the Ashanti warrior to President Ellen Jhonson the first African female President,  and other prolific women. These women  broke all odds to achieve feats ordinarily assumed by men despite the numerous  setbacks they faced. Their stories are told today to inspire the younger generation of women to look beyond society’s limitations and expectations for them as women.

Women have been very efficient and productive in every area of development, however, they aren’t as visible on the web as they should. In order to curb this menace and eventually bridge the gender gap,  several projects have been undertaken by many  institutions. One of these is an initiative by the Goethe Institut and Open Foundation West Africa, dubbed Decolonize The Internet (D.TI.)  writing contest with the theme;  Sheroes Of Africa.

D.T.I is a writing contest where participants are given the platform to celebrate women in the fields of tech, leadership, entrepreneurship, agriculture, sports, and many more by creating new articles, adding more information, and translating old articles about women in different languages on Wikipedia.

The contest seeks  to document and increase content about African women on the web by creating articles on their  biographies which will include their achievements,  personal life, inspirations, etc. This contest further aims at addressing the current gender bias in Wikipedia content.

Are you ready to be a part of increasing the visibility of  heroic moments by African women on Wikipedia?? Join us as we break the bias by projecting our sheroes of Africa in the limelight!

Sign to the dashboard to participate and also sign up via this form to confirm your participation.