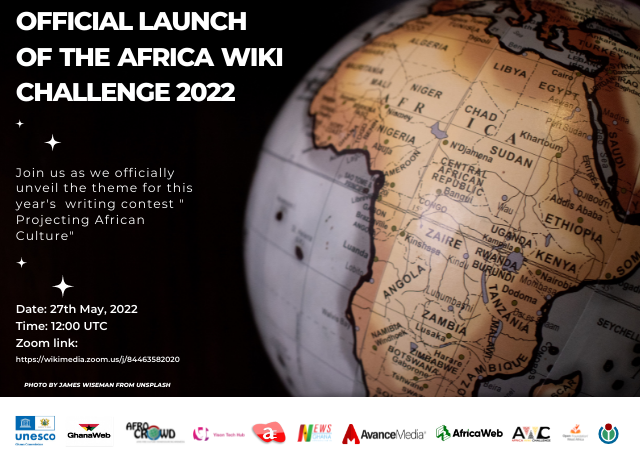 The beauty of Africa roots in the consolidation of rich cultures and the sundry of diverse lifestyles. This makes the continent an empire of lovely people, picturesque scenes from festivals, aesthetically pleasing views of Africans performing beautiful traditional ceremonies, playing sports, eating rich and nutritious food, speaking unique languages, and many more.

This is the perfect opportunity to help bridge the content gap about Africa on the web, specifically on Wikipedia. Considering the fact that as of 2021 Wikipedia ranked the number one (1) most visited encyclopedia in the world according to Similarweb. com. It is appalling to find content about Africa on Wikipedia scarcely.

Join us virtually for the official launch of the contest live on the 27th of May 2022 at 12: 00 UTC  via Zoom for more information on the contest and how exactly you can participate to change the narrative of Africa on Wikipedia.

The theme is targeted at not just projecting Africa’s culture as a whole but also serving as an inspiration to document our own story. Submissions will range from individuals, structures, activities, stories, and other elements that make up the culture of Africa. The contest runs from 27th March to 30th June 2022.

The contest calls on Africans in and outside Africa to contribute content about African cultures like the tribal groups of Ga Adangbe in Ghana, Maasai of Kenya and Tanzania to festival celebrations like the Sango Fire festival in Nigeria and  Umkhosi Mhlanga in South Africa to origins and recipes of African food like Nigerian and Ghanian Jollof to the various African rites like birth rites, puberty rites, funeral rites and more.

The contest will solicit participation through, writing and improving articles and audiovisual uploads.